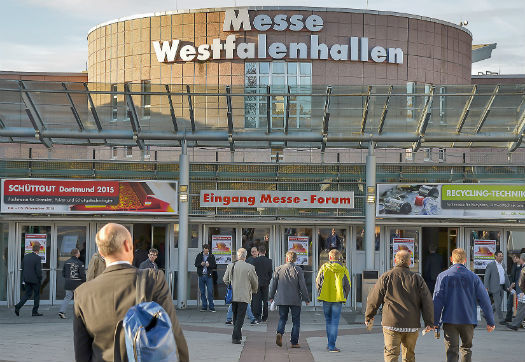 DORTMUND (DE) - On 4th & 5th November 2015 in Dortmund 6,561 trade professionals – 37 percent more than last year – attended the double trade show Solids and Recycling-Technik, setting a new visitor record. The exhibition floor was equally busy on both show days. The visitors came in order to discuss specific projects, make new contacts and to do business with the 450 suppliers present.

The exhibitors were delighted. "This trade show is simply a must for providers of solids technologies – it has become the leading event for the solids industry," says Stefan Meyer, Managing Director of REMA TIP TOP West GmbH. "The positive resonance among the user community confirms the organiser's claim that Solids Dortmund has established itself as a meeting place for the industry," continues Meyer. "We are so confident in this show that we signed up as a premium partner in 2017 before this show was even over." Besides REMA TIP TOP, 170 other companies also reserved stands for the next editions of Solids and Recycling-Technik Dortmund 2017 while still onsite. Thus, 18 months before the next show opens, some 60 percent of the show floor in Halls 4, 5 and 6 is already booked.

"This show was a great success for us," says Michael Hengl, Managing Director Europe at Martin Engineering. "We had one intense technical discussion after the other at our stand, and our VIP lounge at the Business Bar was constantly full. We will certainly arrange for that again in 2017!"

But not only the exhibitors were happy; the visitors also expressed their satisfaction. "I come here regularly but this year I was really impressed," says Uwe Schanzenbächer, Sales Engineer at Aventics GmbH. "This show has turned into something great."

Besides the 362 German suppliers at Solids and Recycling-Technik Dortmund, 88 international companies from 17 different countries – 20 percent of the total number of exhibitors – also saw crowds of visitors at their booths.

In 2015, the well-attended third edition of Recycling-Technik Dortmund took place with 200 exhibitors offering recycling solutions, and with a separate designated recycling hall. "Now that I think about it, our stand was a little too small to accommodate all the people who wanted to talk to us," says Klaus Heusslein, Director of Support - Germany for Recyclix, one of the first-time exhibitors at the show. "For the next edition, we will need more floor space; we're already planning to present our recycling solutions in the coming year at Solids Basel. And we are also considering participation in the shows at Antwerp, Rotterdam and St Petersburg as well."

"It is clear that opening up Hall 7 for Recycling-Technik was the right decision. Here, users of recycling technologies could find what they were looking for in a concentrated and goals-oriented way," says Daniel Eisele, Event Director for both shows. "The vast numbers of visitors and the positive feedback from all the participants speak for the timeliness of our show concept: compact, simple, business-like."

The evening event at the end of the first show day met with general approval. In a relaxed atmosphere with a buffet and live music, all the exhibitors gathered together to witness the second SES Awards ceremony in Dortmund. The criteria for winning included the number of visitors invited by the exhibitor and the number of clicks on the exhibitor's show microsite, as well as the number of products offered there. This year's winner is FTK Förderband Technik Kilian GmbH from Bottrop. Melanie Kilian accepted the €1,000 prize on behalf of her company. The next SES Award will be bestowed on 18th May 2016 at the upcoming Solids Russia 2016, in St Petersburg.

The second honour conferred that evening was the brand new 'Deutsche Schüttgut Verdienstpreis' (German Solids Merit Award), which went to Dr Reinhard Wöhlbier. "With this prize we commemorate someone whose work has had a lasting impact on the German and international solids industry," said Stefan Penno, Chairman of the Deutschen Schüttgut Industrie-Verbandes e.V. (German Solids Industry Association), as he handed the prize to Dr Reinhard Wöhlbier, who "for many decades has moved the solids industry more than any other."

Complementing the shows were 100 lectures held on five stages. With their best-practice cases and technical seminars, the so-called InnovationCenters and SolutionCenters were very popular among the trade professionals. In addition, the guided show tours made it possible for visitors to get a quick, efficient overview of the broad spectrum on offer while simultaneously learning more details about relevant products and equipment.

In parallel with the exhibition and lectures, two expert conferences delved into the topics of the trade shows. The 6th URBAN MINING® Congress took place alongside Recycling-Technik, and in parallel with Solids was the 2nd German Fire and Explosion Protection Congress by IND EX®. Both conferences showed an interdisciplinary focus and received high ratings from participants. The conference organisers and Easyfairs therefore plan on continuing with the congresses in the spring of 2017.