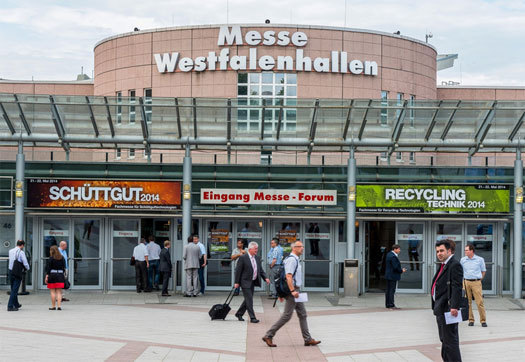 Four months before the expert trade show for granules, powders and solids technologies is scheduled to open, 425 companies have already booked – nearly 10% more than last year. Halls 4, 5 and 6 in Dortmund are already sold out; show organiser Easyfairs is expanding the show into Hall 7.

SOLIDS will take place on 4 & 5 November 2015 in the Messe Westfalenhallen Dortmund. The 7th edition will again be complemented by RECYCLING-TECHNIK Dortmund 2015, the recycling and environment technologies show, as well as the Urban Mining conference. For the first time in the show's history it will cover four exhibition halls. The newly-opened Hall 7 will be devoted thematically to suppliers of recycling and solids technology: crushing machinery, packaging and storage systems, sorting and conveying machinery, shredders and crushing equipment, and separation and processing technologies for recyclable materials.

"This strong resonance among the exhibitors really confirms the concept behind SOLIDS as a straightforward, two-day show focused on innovations and doing business; more than ever, this show fulfils a real need on both sides of the supply-demand equation," says Daniel Eisele, Event Director for Easyfairs. "For many companies, this format works exceptionally well for presenting products, discussing technical solutions with trade visitors and making new or solidifying existing business contacts."

In addition to the exhibition, a rich show programme will offer more than 100 lectures taking place in open forums, the so-called "InnovationCenters" and "SolutionCenters". In-depth seminars will also be held within the framework of two expert conferences running in parallel with the exhibition: the 2nd German Fire and Explosion Protection Congress and the 6th Urban Mining Congress.