Home >> Official Opening of Caserones Copper Mine in Chile >>

Official Opening of Caserones Copper Mine in Chile >> 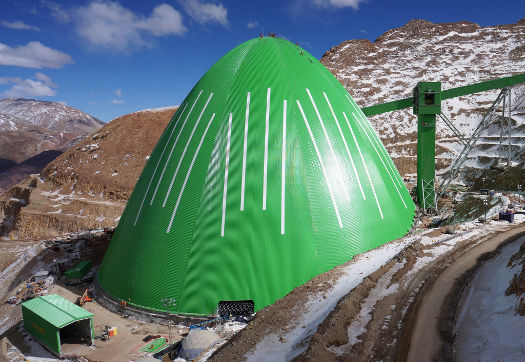 CYPRESS (US) -On July 30th the Minera Lumina Copper Chile (MLCC) held its inaugural ceremony in Santiago for the opening of the Caserones mine.

"The first shipment of copper concentrate has left for Japan. Caserones is now an operating mining concern," said Nelson Pizarro, CEO of MLCC. Japanese Prime Minister Shinzo Abe and Chilean Mining Minister Aurora Williams and other dignitaries from Japan and Chile spoke and joined Pizarro in the official ribbon-cutting ceremony in front of 500 invitees. The occasion commemorated the conclusion of the Caserones construction phase and the launch of its operation.

High in the Andes

Caserones is a a copper ore and concentrate facility located 4000m above sea level in the Chilean Andes, 160km southeast of Copiapó in the Atacama Region. The company is owned by Japan's Pan-Pacific Copper and Mitsui and Co. Ltd. Its construction involved unprecedented challenges due to its rugged location, freezing temperatures, high winds, low ore grade and scarcity of resources. The Caserones domes are designed to withstand a rugged environment involving snow loads that reach 800kg/m2 and wind pressures of up to 300kg/m2.

Among the many distinguishing features of the new mine, the stockpile dome cover stands out. With a 145m span and 94m height, it is the largest such dome in South America. Geometrica was selected to design and manufacture this dome along with the nearby 52m copper concentrate dome based on extensive experience with long-span design and construction on the most demanding terrain. Both are geodesic freestyle domes, trademarked as Freedomes®. The Freedome system takes advantage of form as a structural element and allows domes and vaults to be designed without intermediate columns, eliminating wasted space and maximizing the unobstructed management of inventory, equipment and personnel.