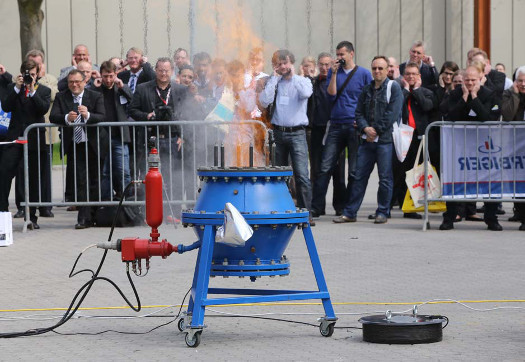 NUREMBERG (DE) - The Exhibition Centre Nuremberg invites the industry to POWTECH again from 30 September to 2 October 2014.

The 2013 event once again consolidated its position as World-Leading Trade Fair for Processing, Analysis and Handling of Powder and Bulk Solids. Every third exhibition visitor and every third exhibitor travelled to Nürnberg from abroad. Eight per cent more visitors* is also a clear indication of the great response from all branches of industry. The initial figures for 2014 are promising as well.

“POWTECH registered its best result so far in 2013 and this positive trend is continuing: We have already received more applications than at the same time before the last event,” reports Willy Viethen, Director Exhibitions POWTECH at NürnbergMesse. “Exhibitors who would like to be there in 2014 should contact us now to stake their claims to the desired stand positions.”

POWTECH in Nürnberg in autumn 2014 will focus on cutting-edge technologies for screening, mixing, milling, dosing and conveying powder and bulk solids. All the associated processes from analysis and packaging to control and instrumentation are, of course, also present at the exhibition.

Over 700 exhibitors from more than 20 countries are expected at POWTECH 2014. This makes the exhibition the world’s biggest presentation of mechanical processing technologies. The exhibitors at POWTECH benefit from extra synergies resulting from the parallel TechnoPharm, Europe’s leading trade fair for sterile production processes in the pharmaceutical, food and cosmetic sectors. The unrestricted access of visitors to both exhibitions opens up extra opportunities for contact with these sectors too.

Visit to Nürnberg − the perfect round tour

POWTECH and TechnoPharm are known for very efficient and concentrated information exchange between manufacturers and plant operators. This will not change in 2014 either.

“After last year’s changes, POWTECH 2014 is now geared to consistency: the hall allocation remains unchanged. So a tour of our exhibition park again opens up access to the whole world of powder and bulk solids technology,” reveals Viethen. The two main entrances to the exhibition site will be open again in 2014 – one in the east of the site, the second directly opposite the underground station. POWTECH occupies halls 1, 4, 4A and 5, and TechnoPharm hall 9. Hall 6 is the mixed products hall again, as POWTECH and TechnoPharm exhibitors are mixed here.