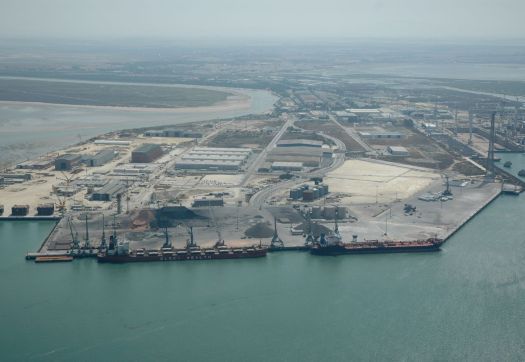 LUXEMBURG (LU) – The European Investment Bank (EIB) has approved a EUR 60 million loan to finance the construction of a new container terminal at the port of Cadiz. EIB Vice-President Magdalena Ülvarez Arza and the Chairman of the Cadiz Bay Port Authority (APBC), Rafael Barra, signed the finance contract in Cadiz today.

At the signing ceremony, EIB Vice-President Magdalena Ülvarez Arza said that 'this project will give a major economic boost to the Cadiz bay area by stimulating goods traffic and creating jobs. It will also contribute to the bay's environmental sustainability and promote the efficient use of resources. With this project the EIB is helping to foster quality economic growth that is environmentally responsible, sustainable and inclusive, in line with the EU's priorities and Cadiz bay's needs'.

APBC's Chairman Rafael Barra added that 'this EIB loan represents more than just financial backing for the project', stressing that the Bank's due diligence ensured the terminal's economic viability and future profitability. He said that the construction of the new container terminal constituted the culmination of the Port of Cadiz's Development Plan launched in 2000, which was based on the specialisation of docks and reorganisation of traffic: 'this project, which will come to fruition thanks to the support of the EIB and EU funds, represents a turning point for the port of Cadiz'.

The loan will help to finance the first phase of construction of the new container terminal at the port of Cadiz, including an internal access road. The project comprises two main components: the construction of around 590 metres of quays to a depth of 16 metres, the reclamation of around 22 hectares of new terminal area, and the dredging of the access channel to widen the turning basin; and the construction of 1.3 km of 2-lane internal access road, including around 0.9 km in a tunnel.

The new terminal will replace the existing container terminal located near the passenger terminal and the city centre and will serve to separate passenger and container traffic, increase capacity and improve accessibility by land and sea. The project will also help to boost competitiveness and employment in the area. It is expected to begin in late 2011 and is scheduled for completion in 2015.
The project will also be financed by the European Regional Development Fund. The total EU contribution, including the EIB loan, will cover around 87% of the total project cost.

Background information:
The European Investment Bank is the long-term financing arm of the European Union working to further European objectives. Founded in 1958, it finances projects in the 27 EU Member States and more than 130 other countries worldwide in line with EU policies. Given their key role in fostering the EU's economic and social integration, the free movement of people and goods, and the development of the Union's less advanced regions, financing the trans-European networks (TENs) is one of the Bank's top priorities.