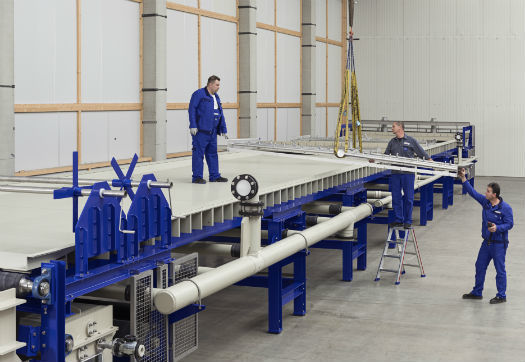 SONTHOFEN (DE) - BHS-Sonthofen presents pilot and lab filters suitably sized. Yet the systems used for well-established manufacturing processes are often of a much larger scale. For example, the specialists for solid-liquid separation were commissioned by a Swedish company with extracting valuable substances from biomass, i.e., fibrous plant residues. As a result, BHS noticeably simplified the intended process while at the same time increasing the concentration of active ingredients. The solution was built around an indexing belt filter of type BF 350-255 with a filter surface of nearly 90 m2 and corresponding record performance.

The customer had initially envisaged a multi-stage process involving a sequence of consecutive screening and filtration steps for the American site. According to this design, the solids would have been added to the extraction liquid and separated in multiple cycles. The company turned to BHS to implement this task. Since the BHS experts for solid-liquid filtration are not dedicated to a specific technology, they first examined the entire process engineering setup together with the user. In view of the numerous process steps that were required in the original design, a number of disadvantages were soon identified.

BHS devised a significantly simplified alternative process based on an indexing belt filter of type BF. This continuously operating, horizontal vacuum filter uses vacuum trays mounted on the frame and a cyclically moving filter cloth as the filter medium. The filter cake that forms on the cloth can be further processed in different ways by means of various process steps – in the present case, this entails repeated washing out using the counterflow principle. During this process, the filtrates can be recovered individually from each vacuum tray and further processed without any intermixing. The final filter cake is discharged at the discharge roller, and the cloth surface is rinsed when the belt is reversed. The drained cloth washing water is used for cake washing and thus further minimizes consumption of fresh water.

All of these advantages quickly convinced the manufacturer, who gave BHS the go-ahead to build a plant of record dimensions: Each hour, the installed indexing belt filter processes up to five tons of enzymatically treated fibrous plant residues, a waste product from cellulose production. The 4.8 x 29 x 2.3 m filter with a filter surface of almost 90 m² extracts the valuable substances, so-called disaccharides, from the biomass dissolved in the liquid. These serve as raw materials for the pharmaceutical or food industry.

The plant residues are first suspended in water as part of the treatment process. Thanks to multi-stage counterflow washing, the indexing belt filter minimizes the use of water and at the same time maximizes the extraction quantity of previously dissolved reusable materials. All in all, the owner of the plant increased usable product yield by ten percent, while also saving approximately 30 percent water compared to the multi-stage process originally envisaged. As an additional benefit, the investment costs for the indexing belt filter of type BF 350-255 are significantly lower than those for the multiple cascades of agitated boilers and filters of the alternative design. The same applies to maintenance costs, as the entire filter plant is much simpler in design than conventional plants. This also ensures a high operational reliability.

The plant in the United States, which has been in operation since 2016, is the highest performing of its kind in the world. BHS-Sonthofen indexing belt filters of various sizes are also used across the globe in a large number of other treatment processes, such as the extraction of lupine extract and the processing of elephant grass residues, algae, corn silage and other biowaste from monocultures.