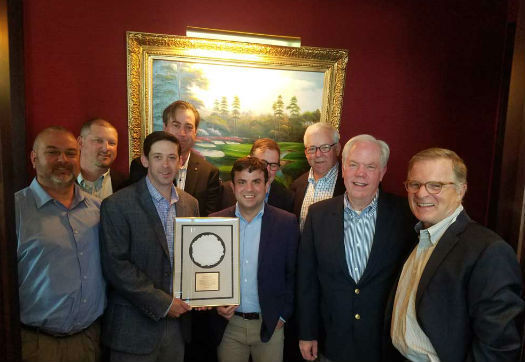 ERIE (US) - Charlie Ingram, Eriez® Vice President of Sales and Marketing, announces that Adams Brothers, Inc. is the winner of the 2016 Merwin Sales Award.

Eriez presents this award annually to honor the U.S. field sales office that represented the company in the most outstanding way over the previous year by demonstrating exceptional sales performance and providing first-rate customer service and support.

Adams Brothers was selected from 23 field sales offices that qualified as Merwin Award finalists based on their superb sales performance in 2016. "While the past year was particularly extraordinary for Adams Brothers, their team has been consistently successful throughout our 54-year partnership," says Ingram. "They reliably achieve outstanding sales results while operating with the utmost integrity and professionalism," he adds.

Established in 1993, the Merwin Award is named for Eriez' founding family. As expressed on the plaque given to all winners, it is presented for outstanding contributions to the advancement of the ideals and mission of Eriez Magnetics using the Golden Rule as a guide, exemplified by superior sales performance, providing customers high quality service and support, and striving to conduct affairs in an efficient, capable and friendly manner.