The Falling Number Method For Detection Of Sprout Damage In Barley 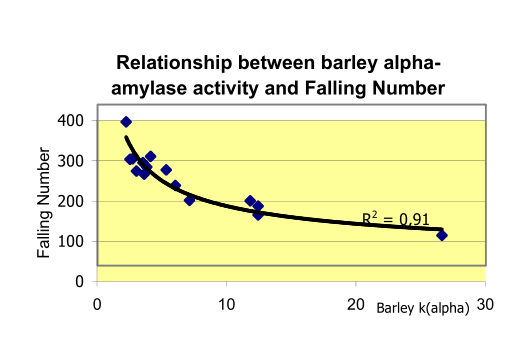 HÄGERSTEN (SE) - The Falling Number method is widely used in the grain and milling industries for rapid sprout damage detection in grain.

The method is standardized and officially approved by important organizations such as AACC, ICC and ISO. The principle of the method is to heat a mixture of water and ground grain, thus gelatinizing the starch. The starch will then be hydrolyzed if α-amylase is present. The higher the α-amylase activity the more starch will be hydrolyzed, thus lowering the viscosity of the mixture. The viscosity is measured by letting a rod fall through the mixture, measuring the time it takes for it to fall a specified distance. That time correlates to the α-amylase activity and is the Falling Number (FN) of the sample.

Sound, viable grains are required for a high germination in malting barley. Several studies have shown that barley that has pre-germinated in the field has a decreased ability to germinate during the malting process, leading to high levels of beta-glucan in the wort. Even barley with a low degree of pre-germination will be affected. The ability to germinate further decreases during storage, and barley with acceptable germination at harvest could only months later exhibit germinations significantly lower than the generally requested 95%. The slight pre-germination is not possible to detect through visual inspection, but through measurement of α-amylase activity. W. J. Pitz. Rapid and Objective Methods for the Estimation of Pre-germination and Viability in Barley. ASBC Journal Vol. 49, No. 3 1991.

P. A. Brookes. The Significance of Pre-harvest Sprouting of Barley in Malting and Brewing. Cereal Research Communications, Vol. 8, No. 1, 1980.