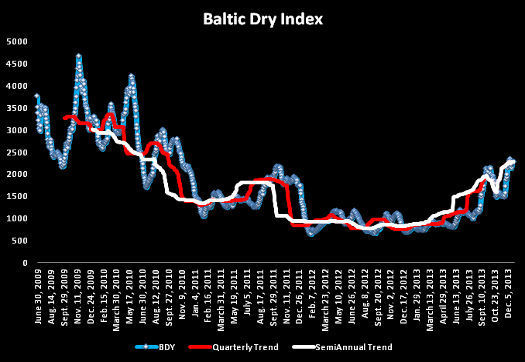 PIRAEUS (GR) – The dry bulk market which has been hovering below the 1,000-point market (BDI) during the past couple of weeks, could be exhibiting signs of a slight positive correction.

In its latest weekly report, shipbroker Fearnleys noted on the Capesize market that "a return rom the Easter break has not improved the market. Quite the contrary - optimism is presently lacking indeed. The C5 West Australia/China run, although stable in volumes, has seen rates falling from around USD 7.60 to below 7.00 pmt w-o-w. Fears of China tightening on commodities-backed financing and Yuan depreciation could see a cool down in commodity prices and potentially imports. Atlantic demand is still thin but fears of instability in gas supply bode for a better coal market with the possibility of increased bulk demand. Front haul has been very quiet but lately there are slightly more enquiries which may possibly fuel the market somewhat. Period activity is very limited due to instability of the forward curve, with Q4 dropping from USD 31,500 to 29,200 and further. Present average 4TC is at around USD 9,100, stable over the week, and too low to justify taking in period tonnage at prevailing levels asked for", said the shipbroker.

On the Panamax market, it added that "the Panamax market continues sideways in most parts of the world. The US Gulf has improved a little bit over the last week with a few fresh requirements coming out, but the rest of the Atlantic remains pretty much unchanged at low levels and with limited activity. The average daily hire in the Atlantic is now around USD 4k. In South America the grain season continues sideways with fronthaul cargoes being fixed around USD 15k +500k ballast bonus. The Pacific market weakened a little bit over the last week, we have seen several aps fixtures which are not a good sign, but now it seems to have stabilized again. The average in Pacific is around USD 7500/day. We have seen limited period activity as well, as owners seem to be more unwilling to fix for period now that the rates has come down. But a few ships were taken for around one year period, all in the range USD 12. 5-13k/day depending the vessels specification", Fearnleys noted.


Finally, on the Handy market, "the week has been mixed with rates seeing a slight increase w-o-w. This is again much lead by the positive sentiment beginning this week, but still we end the week on a negative tone with little activity. The Atlantic is best described as a flat market, with some trades taking a beating while others see a slight increase in rates. In the Pacific the week ended with little happening before the long weekend ahead. Indo coal rounds paying around USD 8.5-9k while the nickel ore business is being fixed in region of USD 10-11k. Let´s see where next week will take us", Fearnleys concluded.

Meanwhile, in a separate report, Intermodal noted on the demolition market, which is always of interest in terms of tonnage oversupply, that things "still remain very positive and despite the fact that a price correction in the Indian sub-Continent has been looming for a while now, the truth is that the high prices we have been witnessing over the past month have only been going higher and this past week was no exception either. It seems that the upcoming national elections in India as well as the budget announcements due the first week of the summer season in both Bangladesh and Pakistan, have not had any particular negative effect so far as most have been waiting for, and although sentiment should be affected by all the above mentioned events, it is only the monsoon season that will most likely affect not only sentiment but prices as well. Up until then we are still watching extraordinary levels achieved in India, while both Bangladesh and Pakistan remain overall firm in their bids. At the same time, the Chinese market is still being described by lack of any substantial activity with more and more “as-is” sales being concluded in the Far East for sub-continent accounts. Average prices this week for wet tonnage were at around 325-500$/ldt and dry units received about 310-490$/ldt", the shipbroker concluded.