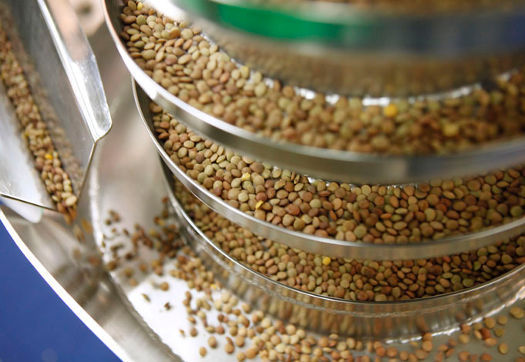 DORTMUND (DE) - With a 50% increase in the number of international exhibitors compared with the last edition, the trade show Solids Dortmund 2014 is also getting a strong reception beyond Germany.

15% of the exhibitors, who exceed 400 in total for the first time, come from abroad. Companies from 13 countries are represented on the floor plan, some of them on international pavilions, for example those of The Netherlands and Poland.

On 21 & 22 May 2014 60 exhibitors from 13 countries including The Netherlands, Italy, Denmark, France, Poland, the Czech Republic and the USA will extend the international trade show offer and exhibit their technologies in Dortmund. They will contribute to a record number of exhibitors: 400 companies will take part in Solids Dortmund 2014, an increase of 15% on the last edition. “The trade show’s growth is benefiting first of all from its location at the heart of North Rhine Westphalia, one of the economically strongest regions of Europe, close to the borders with the Benelux, and secondly from the international networking facilitated by the Solids European Series (SES) of trade shows,” said Daniel Eisele, Event Director with the trade show organiser, easyFairs.

The Solids European Series comprises, as well as Dortmund, bulk solids events in Basel, Rotterdam, Kraków, Antwerp and for the first time in 2015, St. Petersburg. SES also enables interested exhibitors from overseas to enter the European market. For example, the American company Hapman will be present for the first time in Dortmund, exhibiting its products and innovations for the handling of powder and bulk solids materials in a fully sealed atmosphere through the deployment of a chain conveyor. “We already took part very successfully at Solids Antwerp and Solids Kraków last year,” said Gregory A. Patterson, Vice President at Hapman. “Now we are going to exhibit at Solids Dortmund in May and next year we will also be present at Solids Russia in St. Petersburg. The Solids European Series provides us with direct access to our markets.” Altogether, the trade shows record 1,000 exhibitors and more than 11,000 visitors.

“Our exhibitors appreciate the show format and our knowledge of the sector. That’s why many of them take part in several of our Solids European Series shows, like Hapman,” confirmed Daniel Eisele.

For the Benelux countries North Rhine Westphalia is an attractive market because of its geographical proximity and its economic strength. “We are very much looking forward to Solids Dortmund. With 22 Dutch companies exhibiting and eight participants on the Dutch Machevo Pavilion we are excited to present our Dutch technologies to the German market,” said Bas van Gent, Group Exhibition Director with easyFairs in The Netherlands and organiser of the Dutch Pavilion. With this shared stand the Dutch Solids Association Machevo & Bulk Vereniging will be present for the first time at Solids Dortmund 2014. “The Machevo ambition is to promote both the members and the solutions across our national borders. With our participation at Solids Dortmund we very much look forward in introducing our Dutch network to new international peers,” said Tom Pruymboom, President of Machevo & Bulk Vereniging.”

Solids Russia 2015 – the new event in St. Petersburg gets a positive reception among exhibitors

easyFairs is meeting the needs of the solids community with its latest solids event, Solids Russia (27 & 28 May 2015, St. Petersburg). “There is also considerable interest in the Russian solids market in The Netherlands. Exhibitors trust the expertise that easyFairs brings, as organiser of the Solids European Series, to open up this new market. We have already received three concrete enquiries shortly after the launch of the trade show,” said Bas van Gent, Group Exhibition Director with easyFairs in The Netherlands.

Some 400 exhibitors will present at Solids Dortmund and Recycling-Technik 2014. The exhibition covers the processing, handling, transport and storage of bulk solids materials as well as the treatment and further processing of construction and plastics materials, wood, glass, metal and paper. The trade visitor will find the latest products in areas such as weighing and mixing, filtering and grinding of solids materials. Solutions for conveying, storing and packing bulk solids, as well as solutions to security and environmental challenges round off the wide range of topics covered at the show. Solids technologies form an important part of the production process for food and beverages, chemicals, pharmaceuticals, cosmetics, plastics and metal industries as well as the logistics sector, agriculture, construction and mining. Visitors can register online at www.easyfairs.com/schuettgut-de, look at the exhibitor catalogue and arrange meetings with exhibitors in advance of the show. By pre-registering they can avoid waiting times at the entrance. A visit to the event normally costs €25 but for visitors who are invited by exhibitors or media partners admission is free.